Las Vegas producer Kevala achieved second place in our 2020 track challenge with his track “Stationary”.  We sit down with him and ask him a few questions about his music production journey and experience with BassGorilla.

1 )  Congratulations on winning the 2nd place our track challenge!  Did you expect to win?

I wasn’t expecting to be selected in the top 3. I’m happy to say that I’m now confident enough in my music to think that it was a possibility. I was very happy with how the track came out, and thought “why not?”. But there were many other great tracks so I wasn’t expecting it. Although I was super happy to see my track selected..  [If you want to hear the other entries, jump into our Discord channel]

2 )  What is the inspiration behind your track?

The track was called ‘Stationary’, and for making it I was inspired by the way that the world (more precisely, humanity) was forced to a stationary state. Pictures 3 and 6 of the challenge helped me think about this. The Earth was still moving, rotating, translating, but on the surface everything was still. Planes were not flying, cars were not driving, the streets were more occupied by nature than they’ve been in ages, and we humans were in that same state, stationary.

This is what I was trying to convey with my song. To induce that feeling of being still, stationary, to the listener.
I used the snare, which for me feels very constant, like time, to be the element around which everything revolves, in that stable manner.

This stillness in which the Earth lived, however, was surrounded by a big uncertainty. We were stationary on the outside, but on the inside it was challenging.
I wanted to convey this uncertainty with the atmosphere of the tune, noticeable especially in the intro, break and outro, and also during the drop in some elements such as the pads. 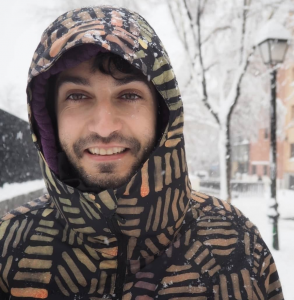 3 )  What programs did you use to create your track?

I produced the track entirely on Ableton Live 10 Suite.

4 )  What is your overall experience with BassGorilla?

I’ve been a member of BassGorilla for the last six months, and I’m very happy with it. Up until now it’s the best resource I’ve found for improving sound in bass music once you already have a solid base. Everything is well organized and categorized, and the courses divided in chapters help a lot to complete them in a few days. It’s so good to be able to enjoy another full year thanks to this contest, I’m very grateful and I’m sure I’ll make the best use of it I can.

5 )  What advice would you give to a producer just starting in the music industry?

I’d say be patient. I’ve spent years focusing on just producing for many hours a day, just practicing. Practice every day, get better and you’ll feel more confident with your sound. Also, make songs. I’ve known other producers who have been discouraged soon because they couldn’t finish songs. From the moment I started, this is what I did. The first songs I made were awful of course, but I forced myself to finish them. Don’t just start ideas. Make full awful songs first, then you’ll be able to make decent songs, and later good songs. But finish songs.

Sign Up to receive the latest news, special offers and awesome deals on our courses

By continuing to browse the site you are agreeing to our use of cookies.